Read the information below, watch the 3 informational videos, then complete the quiz.

A self-contained breathing apparatus (SCBA) is a device worn to provide breathable air in an atmosphere that is immediately dangerous to life or health. They are typically used in firefighting and industry. The term self-contained means that the SCBA is not dependent on a remote supply of breathing gas (e.g., through a long hose). Unofficial names include air pack, air tank or simply pack.

Components:
An SCBA typically has three main components: a high-pressure tank, a pressure regulator, and an inhalation connection (mouthpiece, mouth mask or face mask), connected together and mounted to a carrying frame.

2 Types of SCBA:
A self-contained breathing apparatus may fall into one of two categories: open-circuit or closed-circuit.

The closed-circuit type, also known as a rebreather, operates by filtering, supplementing, and recirculating exhaled gas. It is used when a longer-duration supply of breathing gas is needed, such as in mine rescue and in long tunnels, and going through passages too narrow for a big open-circuit air cylinder.

Open-circuit industrial breathing sets are filled with filtered, compressed air, rather than pure oxygen. Typical open-circuit systems have two regulators; a first stage to reduce the pressure of air to allow it to be carried to the mask, and a second stage regulator to reduce it even further to a level just above standard atmospheric pressure. This air is then fed to the mask via either a demand valve (activating only on inhalation) or a continuous positive pressure valve (providing constant airflow to the mask).

An open-circuit SCBA has a fullface mask, regulator, air cylinder, cylinder pressure gauge, remote pressure gauge (sometimes with an integrated PASS device), and a harness with adjustable shoulder straps and waist belt which lets it be worn on the back.

Open-circuit packs are more commonly used. The Scott SCBA you will be using is an open-circuit type with positive pressure.

A negative pressure system relies on the internal pressure of the mask dropping to below the ambient pressure to activate flow. If the mask does not seal perfectly, some leakage of ambient gas into the mask will occur, which can be a problem with toxic or irritant smoke and fumes.

A positive pressure system slightly pressurizes the interior of the mask and activates flow when the pressure difference is reduced, but still above ambient. If the mask leaks, there will be continuous flow to maintain the pressure, and no inward leakage is possible. With a good fit this is economical on gas and prevents contamination. If the mask falls off the regulator will continuously expend gas trying to raise the pressure, and may consume a significant amount of gas before it is corrected.
​
Although the performance of both types of SCBA may be similar under optimum conditions, this "fail safe" behaviour makes a "positive pressure" SCBA preferable for most applications. As there is usually no air usage penalty in providing positive pressure, the older "negative pressure" type is, in most cases, an obsolete configuration and is only seen with older equipment. However some users refuse to use this technology as in case of a damage or loss of the facepiece the air will be released uncontrolled. The leakage rate can be so high that a fully charged SCBA will be drained in less than three minutes, a problem that does not happen with "negative pressure" SCBA systems.

​The duration of the cylinder can be calculated with this formula: volume (in liters) X pressure (in bars) / 40 - 10 in minutes (the 10 is subtracted to provide a safety margin), so a 6-liter cylinder, of 300bar, is 6 X 300 / 40 - 10 = 35 minutes working duration. The relative fitness, and especially the level of exertion of the wearer, often results in variations of the actual usable time that the SCBA can provide air.
Firefighting SCBA versus Industrial SCBA:

Firefighting SCBA typically includes a PASS device (Personal Alert Safety System). The PASS device sounds a loud (95 decibel) audible alert to notify others in the area that the firefighter is in distress by activating a loud, piercing electronic bleeper. Early models were only able to be activated manually; more recent PASS devices automatically activate if the device does not detect motion for 30 seconds. Firefighting SCBA generally require batteries and include higher level safety alerts and alarms. 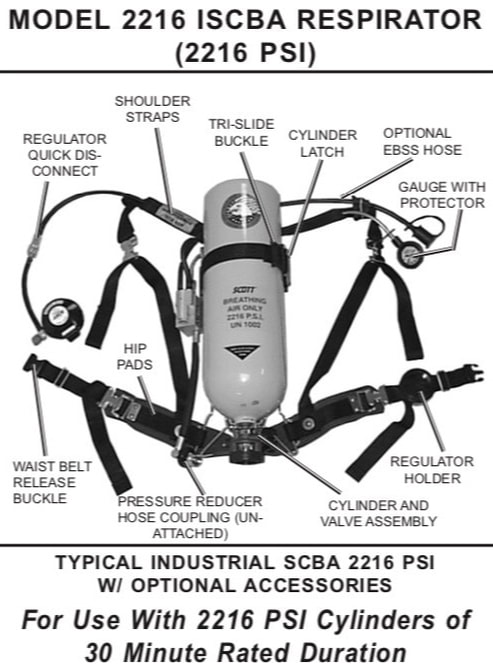 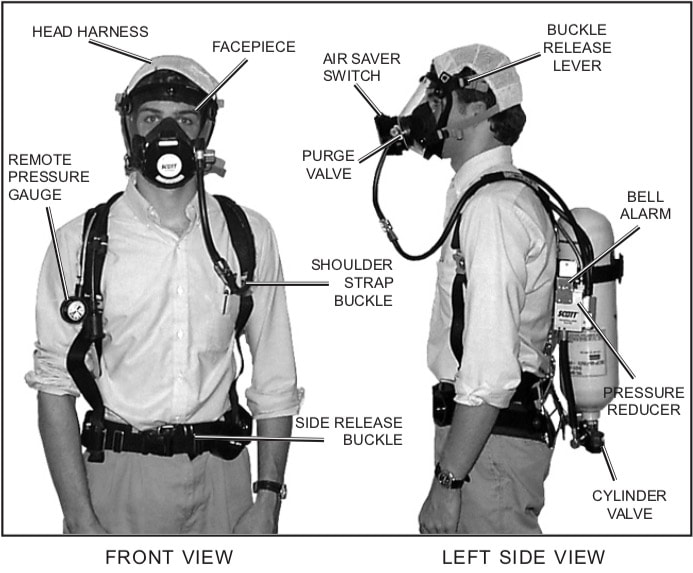 The Scott Industrial SCBA consists of: The pressure reducer has an integral bell alarm to warn the user of diminishing air supply.

The breathing regulator is equipped with an air saver/donning switch which can be activated to prevent rapid loss of air supply if the system is turned on prior to donning the facepiece or if the facepiece is removed while the cylinder valve is open.

Watch the 6:25 minute video below to familiarize yourself with the Scott SCBA:
Fit Testing
Faces and masks come in various shapes and sizes. For any make and model of mask you will be using, a respirator fit test must be performed to ensure the correct respirator facepiece size has been selected and assigned to you.

Fit test subjects must be in good health at the time of the fit testing. Smoking or eating less than 30 minutes prior to the test is prohibited. Any and all conditions that might interfere with a good face to facepiece seal must be addressed and corrected before performing the fit testing. Such conditions include but are not limited to:
To verify the proper fit of the respirator, testing must incorporate an exercise regimen of normal daily activities:
If the user does not pass a respirator fit test, try the next nearest size, larger or smaller, and repeat the pressure leak test. Any facepiece leakage that is detected from other than the face to facepiece seal may indicate damaged or defective equipment. Remove the defective equipment from service and tag for repair by authorized personnel. Repeat the testing with equipment known to be operating properly. If a satisfactory fit test cannot be performed, do not use the respirator or enter the hazardous atmosphere.


Watch the 2:23 minute video below for donning the Scott AV 3000 face mask:
Watch the 5:13 minute video below (starting at 1:08) for two different ways of donning an SCBA pack:
EMERGENCY OPERATION
The Scott Industrial SCBA is automatic in function requiring only the opening of the cylinder valve and the proper donning of the facepiece to place into use and the closing of the cylinder valve at the end of use. In the event of a malfunction or a suspected malfunction, implement the appropriate emergency procedure listed below:
Click the button below to begin your Scott SCBA Quiz (10 questions):
Scott SCBA Quiz CLICK HERE
< Go back to ORIENTATION page